I believe Cookie Has Psychic Powers! After all, there are countless tales of dogs who have appeared to foresee the future, predicting and even averting accidents and disasters. Maybe what appears to be a sixth sense is actually a highly enhanced functioning of the existing five.

Dogs do live in a very different sensory world than us. While we perceive the world around us primarily in visual terms, their world is one of scent and hearing.

Dogs' hearing is around four times more powerful than ours with ears that can revolve like satellite dishes and tell which direction a sound is coming from.

But a dog's hearing is nothing compared to its sense of smell. While we have a mere five million scent glands, dogs have up to 300 million, depending on the breed.

When a dog goes out in the morning and sniffs the air it can literally tell what's passed, what's present, and what's on its way into its environment. So dogs really can see into the future - even if only a short distance. They can also tell what the weather is going to do, since they'll register a slight change in barometric pressure that we humans are blissfully unaware of.

But it's not just their incredibly heightened senses that amaze me. Dogs have evolved with us over thousands of years and are pretty smart at picking up on the tiniest of clues, Witness demonstrations, experiments and doggone fun with Cookie a wonderful dog!

Throw Us A Bone

We're as close as your computer or smartphone! Booking directly through us reducing agency costs is just one way we save you money!

You want choices! I can tailor the entertainment experience to Your Budget & Style. I can bring many characters and acts to your event!

Help me help our furry friends as we do our part for animal causes! 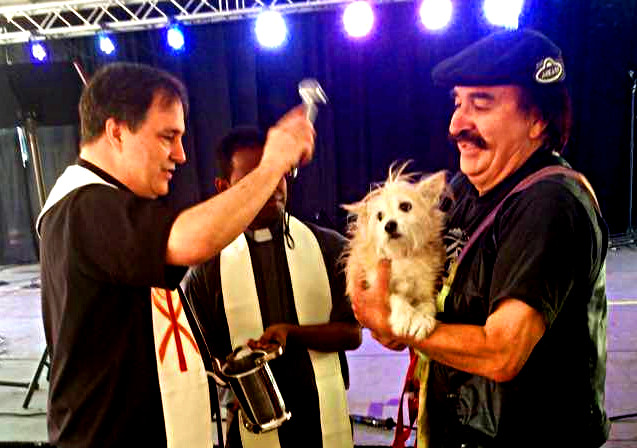 Cookie the psychic wonder dog receives a blessing and declared a Saint at Mission San Gabriel Blessing of The Animals ceremony! 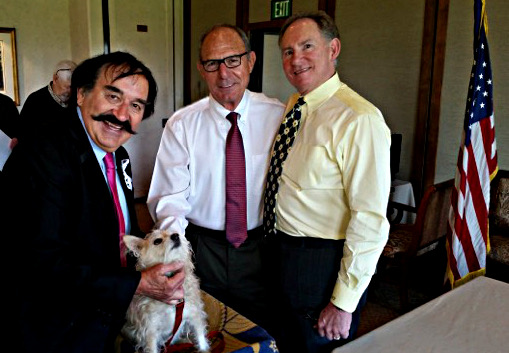 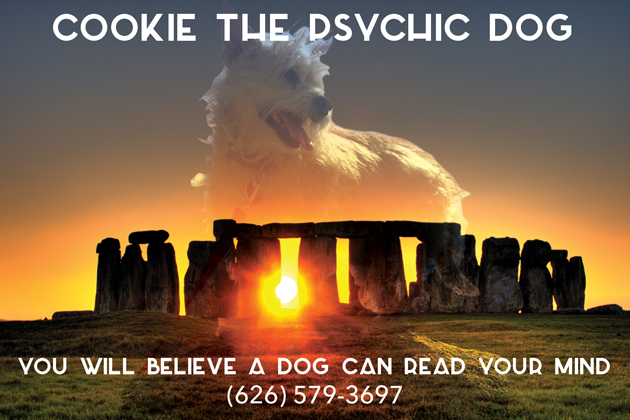 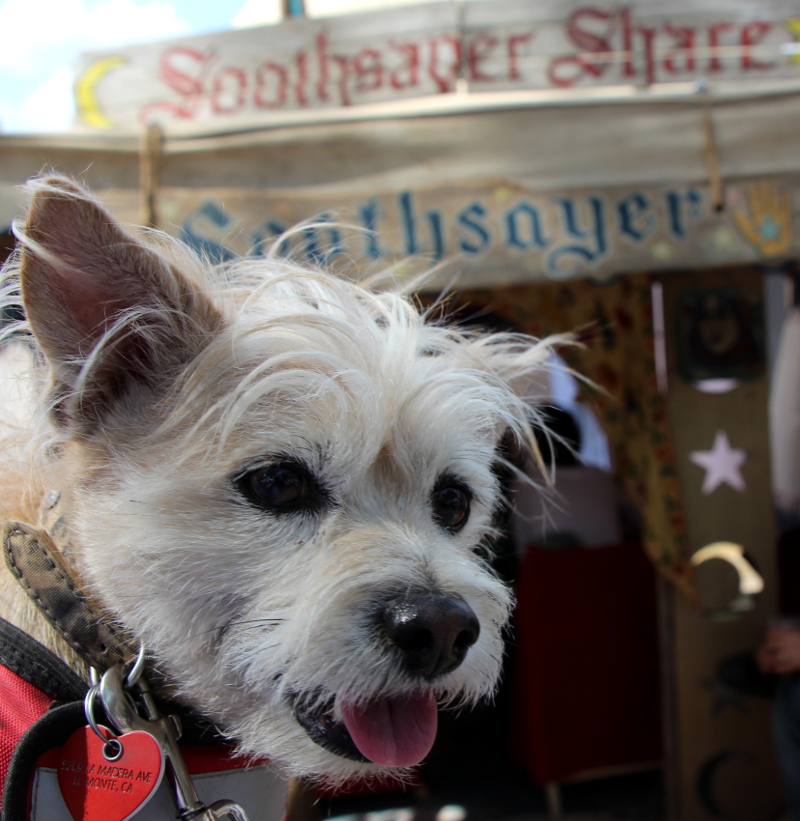 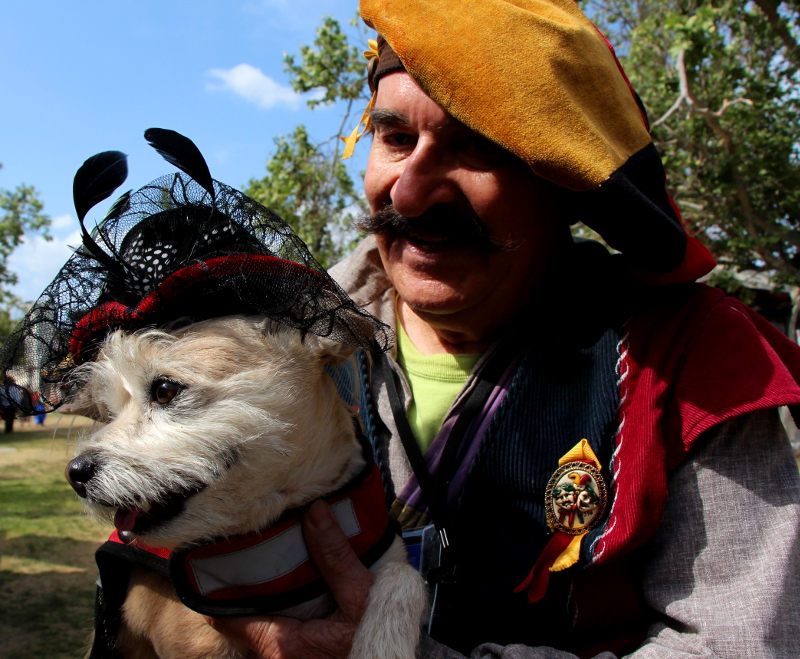 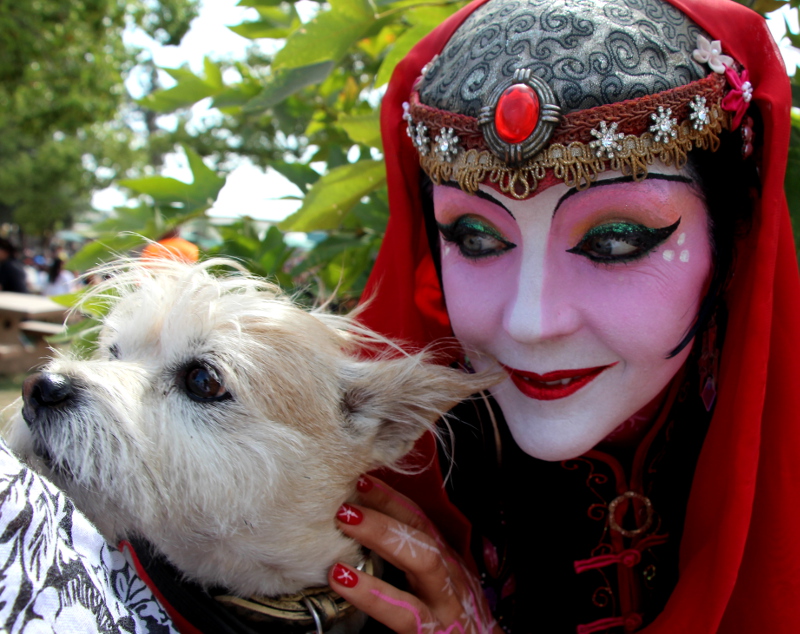 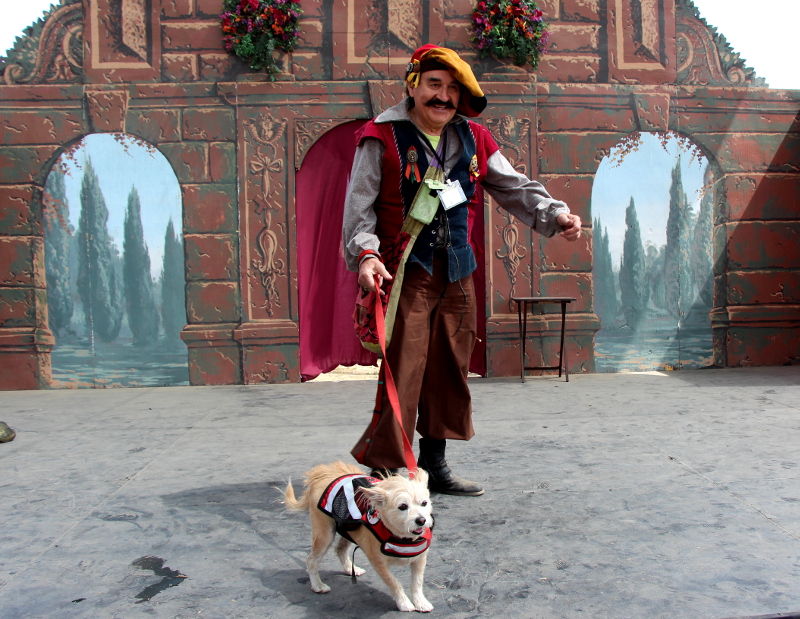 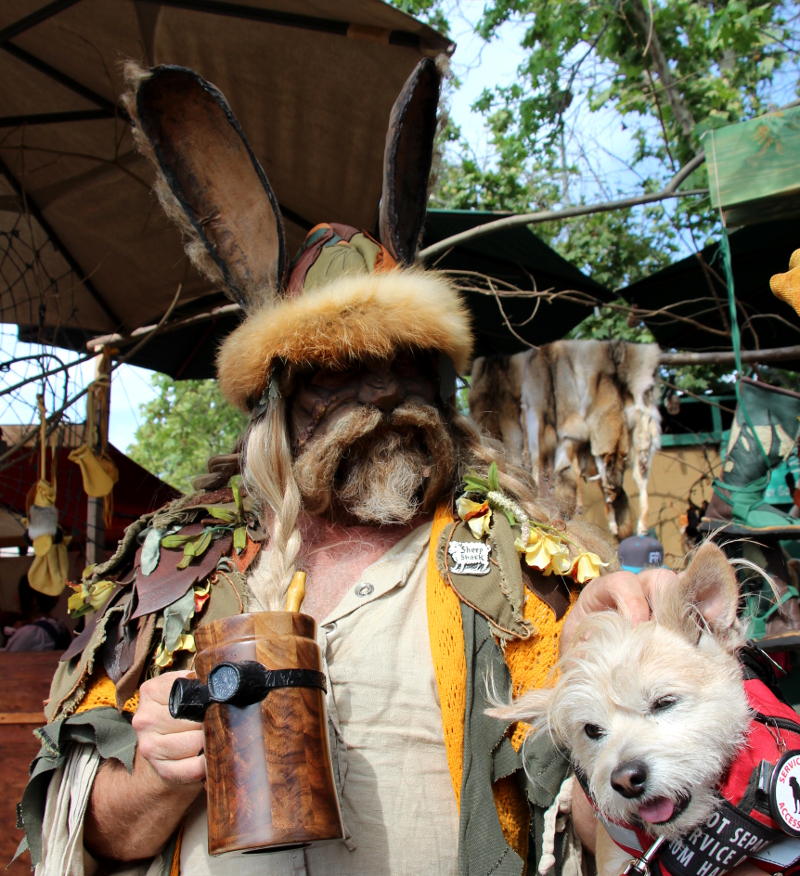 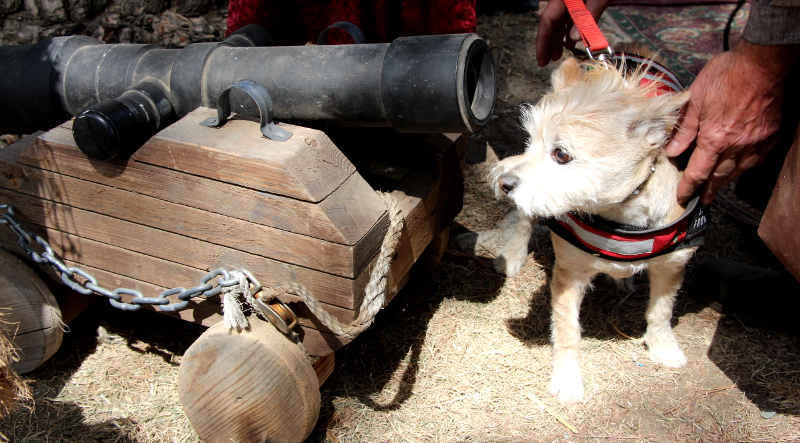 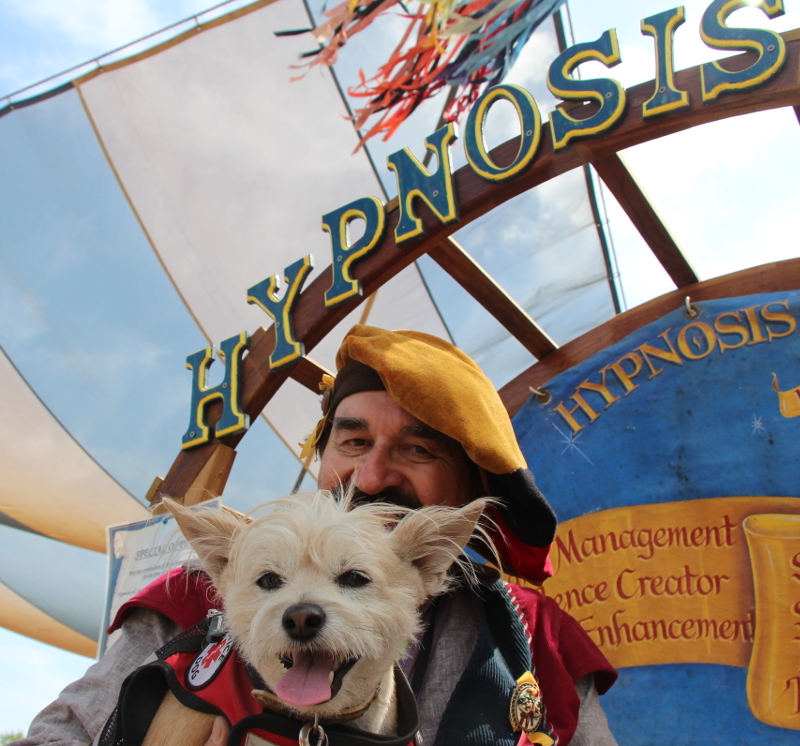 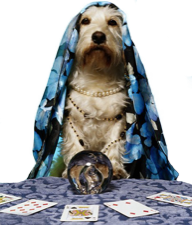 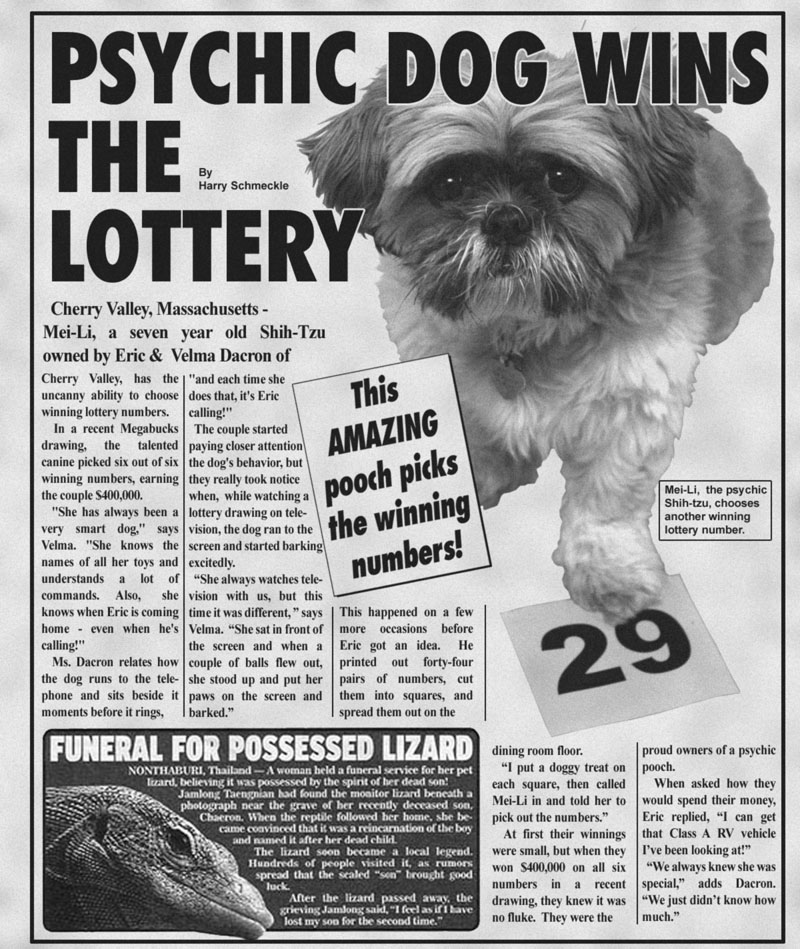 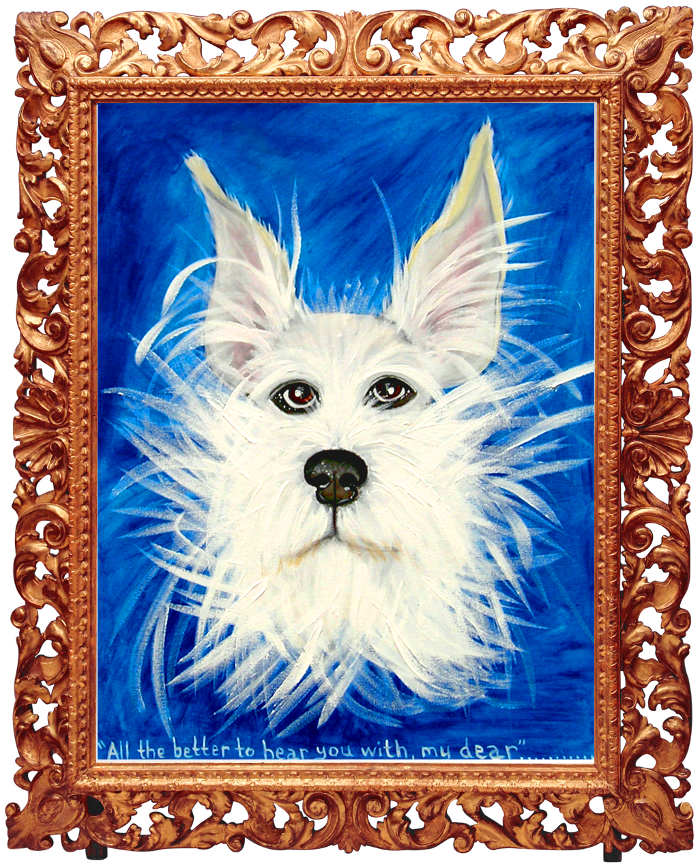 Cookie already knows what you will decide but I need you to tell me since she keeps that info to herself!

"You can say any foolish thing to a dog, and the dog will give you a look that says, 'Wow, you're right! I never would've thought of that!'” —Dave Barry (author, Dave Barry Hits Below the Beltway: A Vicious and Unprovoked Attack on Our Most Cherished Political Institutions)

"A dog teaches a boy fidelity, perseverance, and to turn around three times before lying down." —Robert Benchley (humorist and actor, Broadway Melody of 1938)

"A dog is the only thing on earth that loves you more than he loves himself." —Josh Billings (a.k.a. Henry Wheeler Shaw; humorist and lecturer)

“Hounds follow those who feed them.” ―Otto von Bismarck (1st Chancellor of Germany)

"Dogs are not our whole life, but they make our lives whole." —Roger Caras (photographer and writer)

"Every dog has his day, unless he loses his tail, then he has a weak-end." —June Carter Cash (singer)

“Dogs are wise. They crawl away into a quiet corner and lick their wounds and do not rejoin the world until they are whole once more.” —Agatha Christie (author, Death on the Nile)

“The world would be a nicer place if everyone had the ability to love as unconditionally as a dog.” ―M.K. Clinton (author, The Returns)

“The better I get to know men, the more I find myself loving dogs.” —Charles de Gaulle (former President of the French Republic)

“The only creatures that are evolved enough to convey pure love are dogs and infants.” —Johnny Depp (actor, Pirates of the Caribbean)

"Dogs are better than human beings because they know but do not tell." —Emily Dickinson (poet, "Hope is the Thing with Feathers")

"Why does watching a dog be a dog fill one with happiness?" —Jonathan Safran Foer (author, Extremely Loud and Incredibly Close)

“There are three faithful friends: an old wife, an old dog, and ready money.” —Benjamin Franklin (Founding Father of the United States)

"Dogs love their friends and bite their enemies, quite unlike people, who are incapable of pure love and always have to mix love and hate." —Sigmund Freud (psychoanalyst)

"Women and cats will do as they please, and men and dogs should relax and get used to the idea." —Robert A. Heinlein (author, Starship Troopers)

“When an eighty-five pound mammal licks your tears away, then tries to sit on your lap, it's hard to feel sad.” ―Kristan Higgins (author, In Your Dreams)

“To his dog, every man is Napoleon; hence the constant popularity of dogs.” —Aldous Huxley (author, Brave New World)

“There are times when even the best manager is like the little boy with the big dog — waiting to see where the dog wants to go so he can take him there.” —Lee Iacocca (former president and CEO of Chrysler)

"Anybody who doesn't know what soap tastes like never washed a dog." —Franklin P. Jones (humorist and PR executive)

“A dog can’t think that much about what he’s doing, he just does what feels right.” ―Barbara Kingsolver (author, Animal Dreams)

"When the Man waked up he said, 'What is Wild Dog doing here?' And the Woman said, 'His name is not Wild Dog any more, but the First Friend, because he will be our friend for always and always and always.'" —Rudyard Kipling (author, The Jungle Book)

“Once you have had a wonderful dog, a life without one, is a life diminished.” —Dean Koontz (author, Whispers)

"Don't accept your dog's admiration as conclusive evidence that you are wonderful." —Ann Landers (a.k.a. Eppie Lederer; famous advice columnist)

"I care not for a man's religion whose dog and cat are not the better for it." —Abraham Lincoln (16th President of the United States)

“A bone to the dog is not charity. Charity is the bone shared with the dog, when you are just as hungry as the dog.” —Jack London (author, The Call of the Wild)

“Outside of a dog, a book is man's best friend. Inside of a dog it's too dark to read.” —Groucho Marx (comedian)

“Dogs never bite me. Just humans.” —Marilyn Monroe (actress, Some Like It Hot)

"No one appreciates the very special genius of your conversation as the dog does." —Christopher Morley (author, Kitty Foyle)

"If you think dogs can't count, try putting three dog biscuits in your pocket and then give him only two of them." —Phil Pastoret (author, Our Boarding House)

“I think dogs are the most amazing creatures; they give unconditional love. For me, they are the role model for being alive.” —Gilda Radner (comedienne)

"If there are no dogs in Heaven, then when I die I want to go where they went." —Will Rogers (actor, A Connecticut Yankee)

"The average dog is a nicer person than the average person." —Andy Rooney (contributor, 60 Minutes)

"I wonder if other dogs think poodles are members of a weird religious cult." —Rita Rudner (comedienne)

“If you eliminate smoking and gambling, you will be amazed to find that almost all an Englishman's pleasures can be, and mostly are, shared by his dog.” —George Bernard Shaw (playwright)

"I've seen a look in dogs' eyes, a quickly vanishing look of amazed contempt, and I am convinced that basically dogs think humans are nuts." —John Steinbeck (author, The Grapes of Wrath)

"You think dogs will not be in heaven? I tell you, they will be there long before any of us." —Robert Louis Stevenson (author, Treasure Island)

“Some of my best leading men have been dogs and horses.” —Elizabeth Taylor (actress, Cleopatra)

"If I have any beliefs about immortality, it is that certain dogs I have known will go to heaven, and very, very few persons." —James Thurber (author, “The Secret Life of Walter Mitty”)

"If you want a friend in Washington, get a dog." —Harry S. Truman (33rd President of the United States)

"Heaven goes by favor. If it went by merit, you would stay out and your dog would go in." —Mark Twain (author, The Adventures of Tom Sawyer)

"Ever consider what our dogs must think of us? I mean, here we come back from a grocery store with the most amazing haul, chicken, pork, half a cow. They must think we're the greatest hunters on earth!" —Anne Tyler (author, The Accidental Tourist)

“A dog will teach you unconditional love. If you can have that in your life, things won't be too bad.” —Robert Wagner (actor, The Longest Day)

"If a dog will not come to you after having looked you in the face, you should go home and examine your conscience." —Woodrow Wilson (28th President of the United States)